12 km from Velingrad, in the region of the municipality of Rakitovo, is located the cave Lepenitsa, an exceptional tourist site. The cave “Lepenitsa” is at the altitude of 1OOO-1ZOO m. It was proclaimed a landmark and is a protected area of ​​52 acres. It is unique for Bulgaria. Its small lakes and the wonderful formations awaken the human imagination. Here the nature shows its majesty. So far have been explored and mapped 1525 meters of it, but no one has reached the end and has not seen everything that nature has created in its millennial history. It is open for visiting on September 11, 2010. Some of the halls have interesting names such as “The concert hall”, “Armani” and “The landslide”. There are unique natural formations of extraordinary beauty – stalactites, stalagmites, curtains, subterranean lakes, pearls and roses. The cave is located at the foot of Mount Syutka and the area around the entrance is covered with forests. It is about 10 miles southeast of the town Rakitovo and 12 km from Velingrad, by the road that leads to the town Sarnitsa.

The cave is at three levels. The bottom is almost three hundred meters long and there passes an underground river The second level has four lakes that fill when rains. In the dry part there are only two. The level is dry, but not accessible; even the most experienced cavers do not dare to enter. Inside the cave there are extremely beautiful stalagmites, stalactites and stalagons, which are traditional cave formations. The cavern  pearls, which  have been found here, are exhibited at the Museum “The Earth and The People” in Sofia. In 1930 in Rakitovo was founded the first branch of the Bulgarian Association of speleologists. Many local cavers who are eager to explore Lepenitsa took part in its opening.

In 1931 a third of the cave was explored and mapped. The complete study was conducted 40 years later, in 1973. During the studies have been found representatives of the fauna, which are very interesting. So far, 24 species have been described, 6 of them are troglobios. These are creatures that inhabit only the caves. Lepenitsa is home to six species of bats, which like the constant temperature inside.

More than 50 years the cave has been inaccessible for tourists, but nowadays it is a frequented destination. In 1960 it was declared natural curiosity and the visits are made only with guide and suitable equipment. Everything is organized before and the movement in the interior is on a fixed route, because the cave is quite dangerous.

Extreme clubs organize visits to the cave and provide tourists with equipment and guide. 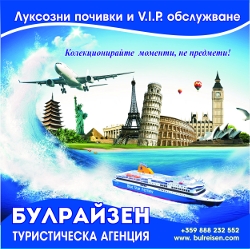